Experiences at the COP or experiences in the classroom are formative opportunities for Emory students to engage in the real work and scholarship of climate change.
Image 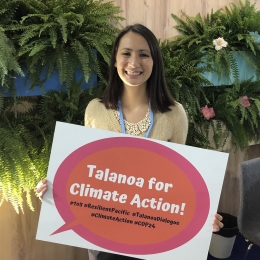 COP23 & COP24 Alumna
Alumni Reflection: The COP23 and COP24 negotiations were some of my most influential experiences as an Emory student and were really instrumental in shaping my academic interests. At COP23, I was able to speak with policymakers, corporate leaders, and researchers about the impact of climate change on food security and agriculture, and at COP24 I was present as the World Health Organization publicly released its special report on health and climate change. The conferences ended up being a major reason I chose to pursue an MPH in Environmental Health Promotion & Policy.

For me, a highlight of the conferences was observing the changing role of the U.S. in the negotiations. At COP23, the U.S. had just announced its intention to withdraw from the Paris Agreement, and I was able to see how the international community reacted to it over the next two years. It was exciting to be able to watch the growth of the “We Are Still In” movement, as businesses, cities, and states pledged to remain committed to Paris Agreement’s goals on a sub-national level. Even more exciting was being able to watch this momentum grow over two years.

Overall, my favorite part of the conference was that I was surrounded by people who were working towards a common cause, but who came from very different backgrounds and had different approaches to climate action. It was exciting when the Emory delegation was able to speak in a panel with students from Colorado State University, Clark University, and the Caribbean Youth Network about student and university climate action efforts. I learned a lot about the work other schools and students are doing for climate action, and it was very motivating in my own climate action pursuits. 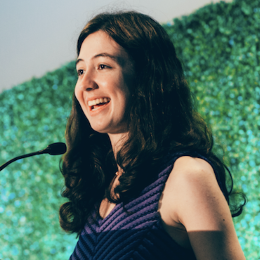 COP23 Alumna
Alumni Reflection: I graduated from the London School of Economics in 2020 with a master's in Environmental Policy and Regulation. I think that my experience at Emory and at the COP specifically prepared me so well for graduate level studies. As part of the UN field research course I took with Dr. Saikawa and Professor Tefft, I learned how to conduct high-level expert interviews with leading scientists and policymakers, and how to effectively communicate research through podcasts and white papers. Those skills ended up being invaluable throughout my time at the London School of Economics, where I participated in a research project on corporate net-zero emissions pledges led by Dr. Richard Perkins. I currently work as an analyst on the corporate sustainability team at Honda.

My freshmen year, I took a climate policy seminar in the ENVS department, where I learned about the history of the UN Climate negotiations and the historic nature of the Paris climate treaty. Though I had been involved in environmental activism throughout my middle and high school years in California, I knew very little about the trajectory of international climate politics. I was excited by the intricacies of climate coalition-building, and the complexities inherent in balancing global climate governance with national level flexibility. In the spring, I met Dr. Saikawa at an event called the Georgia Power Dialogue and she told me about Emory's inaugural delegation to COP 21 in Paris. I also spoke to several students who had been to COP 21 in Paris and were involved in founding the Emory Climate Organization. I was really inspired by their experiences.  When an opportunity came up to attend the 2016 UN Climate Talks in Bonn, Germany, I immediately applied to attend.

My second time attending the UN was my junior year at Emory. At that point, I had already served as co-president of the Emory Climate Organization (ECO) for several years and had worked with Dr. Saikawa and other student leaders to build momentum for climate advocacy on the Emory campus.

Before attending the UN Climate Talks, I had watched videos of prior conference proceedings and I had some idea of how the official UN Climate negotiations were structured. However, nothing could have prepared me for the chaos that ensues at conferences as thousands of delegates attempt to reach some level of consensus, or the thrill of being at the center of a climate incubator with so many dynamic leaders.

My first time at the UN Climate talks, I attended meetings for YOUNGO (the youth constituency group for the UN). I was offered the opportunity to join a youth climate dialogue with Christiana Figueres, who was the executive secretary of the UNFCCC at the time. Alongside a group of other youth activists, I had the chance to offer recommendations to Ms. Figueres on strengthening youth representation at UN climate negotiations. It was exhilarating to work with so many other youth climate leaders, and I never anticipated that I would have the ability to use my voice to advocate for change on an international scale.

My biggest take-away from the COP conferences is that possessing scientific or policy expertise in the climate change arena is not enough in order to craft an equitable and just global climate agenda. The UN climate negotiations cannot be inclusive unless climate decision-makers consult with delegates from an array of different backgrounds, many of whom view climate change as a life or death issue that will dictate their country's future survival. In this sense, listening to other voices is incredibly imperative in ensuring that environmental justice is integrated throughout the negotiation process. 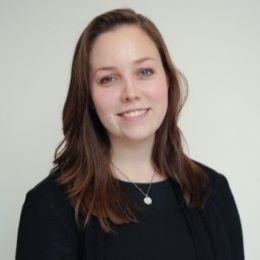 COP21 & COP22 Alumna
Alumni reflection: There is only so much you can learn about environmental policy from a classroom or textbook. Some choose to augment their learning by going out in the field, or researching in the lab. But I wanted to see how environmental policies were made up close. An avid Model UN competitor and environmental science major, the opportunity to work with Emory faculty to teach a course on the climate change negotiations and participate in our first ever observer delegation was a dream come true.

Negotiations for environmental treaties are complex and fascinating, and my appreciation for this particular policymaking process changed dramatically after observing COP21. The experience of meeting government negotiators and watching them collaborate to craft the Paris Agreement changed my entire academic and professional trajectory. I’ve known since I was young that I wanted to become a public servant and protect the environment, but this invaluable experience convinced me to choose to do so as a lawyer, and maybe also as a diplomat.

Since leaving Emory I have had the opportunity to come full circle on my COP21 experience. I have worked with the United Nations International Law Commission to craft guidelines for States on protection of the atmosphere. And I interned during law school at the U.S. Department of State Office of the Legal Adviser, where I worked with our government’s negotiators to prepare for COP25. None of this would have been possible, nor even on my radar, if not for the opportunity to join Emory’s first delegation to the COP.  In 2020, I graduated from the New York University School of Law.

After participating in COP 21 and founding the Emory Climate Organization with my fellow student delegates back in 2016, a few of us decided that the fun and advocacy didn’t have to end when when we graduated, so we founded the Emory Alumni Environmental Network. Join us to build community and professional skills as you enter the environment and sustainability industry! 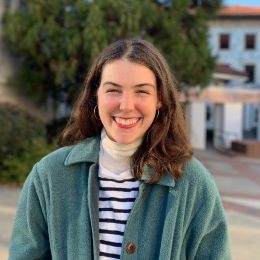 AmpliFIRE Co-Producer and COP24 Alumnna
After her graduation from the Laney Graduate School, Halle spent a year with the UN Environment Programme before moving back to Georgia to become the Community Projects Coordinator for the City of Savannah. Halle’s time at Emory was enriched as a participant in the Emory Climate Talks group that attended the UNFCCC COP in Katowice, Poland in 2018.

Especially important for Halle during her time on campus was her involvement in residence life and her service as a Residence Hall Director on campus. Halle defended her master’s thesis, The Effect of a State’s Commitment on Policy Responsiveness of the Endangered Species Act,” in the spring of 2019. 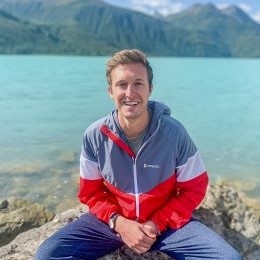 COP21 Alumnus
Taylor McNair graduated in 2016 with a double major in Environmental Sciences and Business Administration in Consulting and Environment/Sustainability Management. Taylor currently works as a Program Manager at GridLab, a national nonprofit that provides technical expertise to enhance policy decision making to ensure a rapid transition to a clean energy future.

GridLab supports clean energy advocates, regulators, and policymakers to remove barriers to clean energy adoption. While much of their work is at the state level, often intervening in front of public utility commissions, they also produce thought leadership and content on emerging technical energy grid issues and are often viewed as a go-to source for technical grid expertise. Last year, GridLab helped release the 2035 Report, an analysis detailing how the U.S. can achieve 90% clean energy by 2035. As Program Manager, Taylor manages many of technical grid projects, supporting things like national/regional decarbonization studies or analyses and critiques of proposed fossil fuel plants.

COP 21 in Paris, along with the class taught by Professors Longhofer, Saikawa, Tefft, was probably the defining moment of Taylor's undergraduate experience. In Paris, he was able to observe his interests and educational experiences collide in a real world setting. Observing the negotiations and participating in side events allowed Taylor to see how policy and technology influence each other, and he got the chance to witness how certain stakeholders, corporations, key regulators, etc. sought to influence policymaking on the global scale. Not to mention, he got to spend 2 weeks in Paris with some of the brightest, most engaging, and interesting group of students and professors. 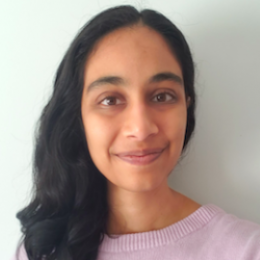 COP25 Alumna
Ambika Natarajan 21C completed her Emory degree in Chemistry (B.S.) and Global Development Studies. Through the Emory Climate Talks Program, Ambika was able to attend COP25 in Madrid, Spain, during which she followed the negotiations on Article 6 of the Paris Agreement. She conducted research under the supervision of Dr. Craig L. Hill on the development of potential water oxidation catalysts to assist the sunlight-driven production of hydrogen fuel.

Outside of the lab, Ambika worked on projects related to hospital waste management and urban gardening in the context of the Sustainable Development Goals through the Emory Global Health Institute and RCE Greater Atlanta, respectively. She looks forward to interning with Brookhaven National Lab post-graduation. 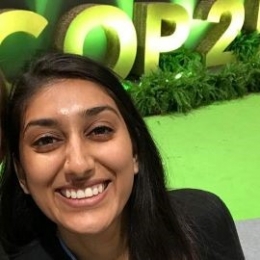 COP25 Alumna
I graduated with a Master’s in Development Practice from the Laney Graduate School in 2020 and currently work at Stanford University in energy and climate education. My primary interest in graduate school focused on climate adaptation and community-led movements in the Global South.

Given the focus of COP25 on gender, I had the opportunity to dive deeper into its role of social change while engaging with BIPOC activists from around the world. I also presented my research on mapping social assets in informal settlements to mobilize climate adaptation solutions. The integrated vision of COP25 reinforced the need to close the gap between high-level policy and community movements to address climate change equitably, which continues to inform my perspective today.