After dinner, it’s easy to scrape your last few bites into the trash can without a second thought. Although those scraps may seem insignificant, your food waste, plus the food wasted at the pre-consumer stages of the food supply chain, add up: each year, about one-third of the global food production is lost or wasted.

In the United States (U.S.), about 30% of all food, worth $48.3 billion, is discarded each year. American consumers play an especially significant role in contributing to this issue, as about 30% of the national food loss occurs at the consumer and retail levels. This is part of a global pattern, as annually, consumers in rich countries waste almost as much food as the entire net food production of sub-Saharan Africa.

As one would expect, it is indisputable that wasted food is incredibly wasteful of calories and nutrients: if just one-fourth of the food currently lost or wasted globally were saved, it could feed 870 million people. However, what is not spoken about as commonly are the climate impacts of food waste.

You may have heard about or read the Intergovernmental Panel on Climate Change’s latest report on climate change (AR6). Released in August of this year, it summarizes the current state of the climate and possible global futures depending on the actions that are taken in the next few years. Food and food waste are not explicitly mentioned in the report; however, upon a closer look, the connection between food and climate is woven into the report’s findings.

When food sits in a landfill, it decomposes, releasing the second major greenhouse gas, methane (CH4). Since food makes up about a quarter of everyday waste in the U.S., it is a major reason why landfills are the country’s third-largest source of human-related methane emissions.

In direct alignment, the IPCC report touches upon the significant contribution of methane to climate change ― methane alone contributed to about an 0.5 degrees Celsius rise in the Earth’s temperature compared to an 1850-1900 baseline. In fact, CH4 is a much stronger greenhouse gas than CO2. It has a global warming potential that is about 20 to 30 times greater than that of CO2 in a 100-year period, and about 80 times greater in a 20-year period, since methane’s presence in the atmosphere is so short-lived. In the report’s words, “strong, rapid and sustained reductions” in CH4 are crucial to curb rising temperatures, and food waste reduction could be one avenue for doing just that.

In addition to releasing methane, landfilled food wastes the energy and labor dedicated toward its growth, preparation, and transportation. Because of these wasted resources, food waste contributes to about 8-10% of global greenhouse gas emissions. In the U.S. alone, the production of lost or wasted food generates the equivalent of 32.6 million cars’ worth of greenhouse gas emissions. Thus, reducing the world’s food waste could save 90.7–102 gigatons of CO2 , which is roughly fourteen times the annual emissions of the U.S.

To address the food waste crisis, one promising technology is currently being explored and discussed at Emory. Last year, Emory received funding from the Environmental Protection Agency (EPA) to investigate how anaerobic digestion (AD) might be applied on campus. AD is a natural process in which microorganisms break down organic materials (e.g. food scraps) in an environment without oxygen. Anaerobic digesters are a type of technology that harness this process to produce biogas ― which can be used as renewable energy ― and digestate ― a nutrient-rich substance that can potentially be applied to crops as soil amendments.

In this way, AD creates many climate-related benefits as it captures the CH4 released by food scraps for conversion to renewable energy, rather than the gas being released straight into the atmosphere. Furthermore, the use of this renewable energy reduces reliance on fossil fuels, which release emissions that contribute to climate change. 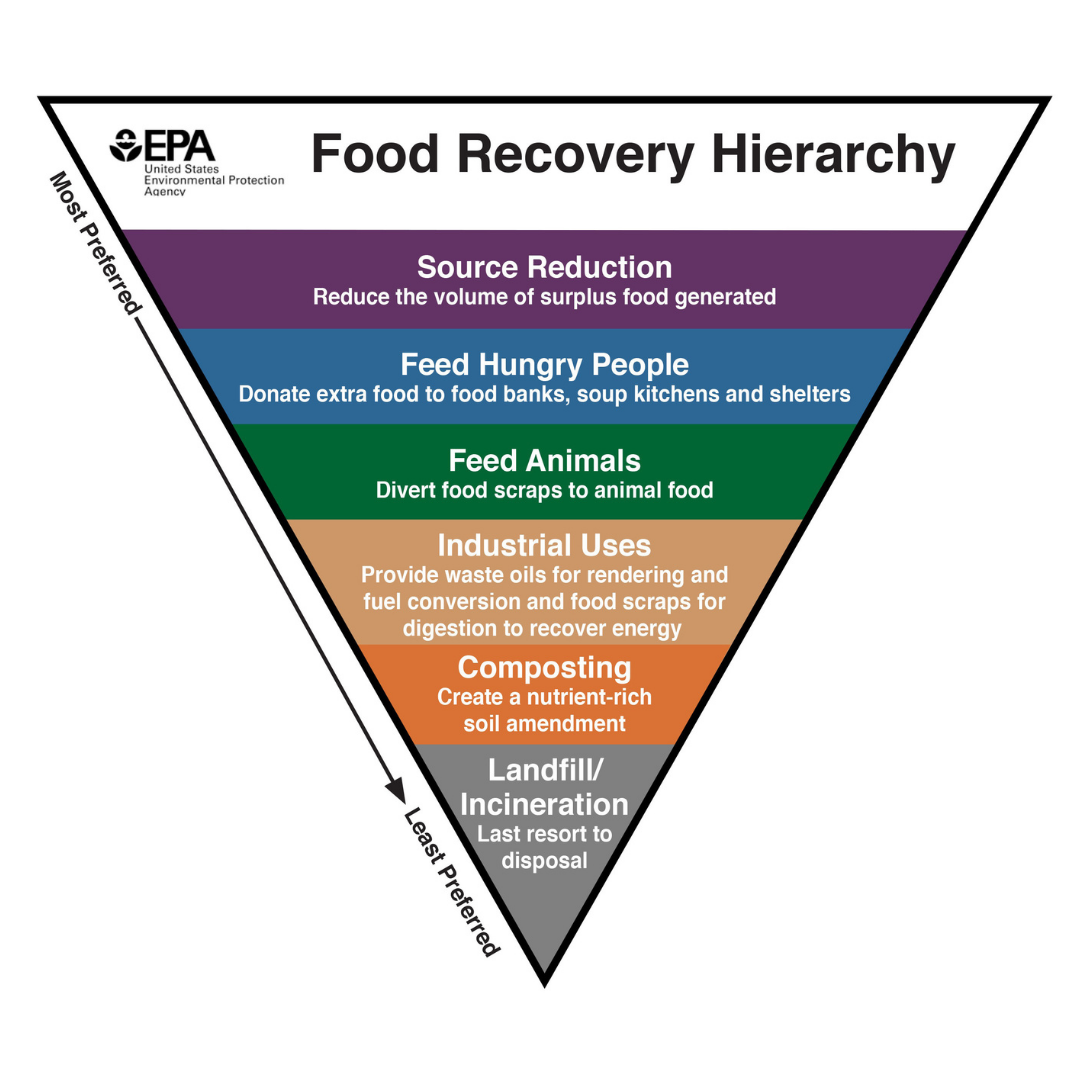 It is important to note that AD is not a perfect solution to the climate impacts of food waste. Rather, the most effective way to reduce food waste and its impacts is to go to its source. The EPA Food Recovery Hierarchy, pictured here, ranks the most effective and equitable ways to manage food waste. AD falls under the “industrial uses” level, so it is preferable to waste management methods such as landfilling, but less ideal than source reduction.

While AD action originates mostly from an institutional or industry level, individual awareness is key. If post-consumer food waste is to be anaerobically digested effectively at Emory, all individuals must properly sort their food waste to retain a clean compost stream. Better yet, we can prevent the issue through source reduction efforts such as boxing up leftovers, practicing meal planning, and taking smaller portions at the dining hall (and returning for seconds if necessary).

The topic of food waste is often neglected in climate-related conversations; however, it is important to consider its significant contribution to climate change. The innovative technology of AD is promising in that it creates the potential for balancing the negative impacts of food waste with climate benefits including renewable energy generation and sustainable food production. As members of the Emory community, we are fortunate enough to have discussions surrounding this exciting technology occurring right here on campus. Given that educating consumers about food waste could prevent millions of tons of emissions, awareness is a foundational step toward progress. Continuing to learn about and discuss this innovative opportunity will go a long way toward ensuring that the proper management of food waste is recognized as the climate solution that it truly is.